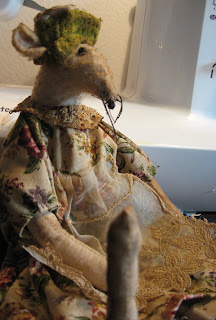 One great fear about being in a dark and enclosed place is the thought that you will not get out.That you will simply wander until your mind runs off with your senses and leaves your body to itself. The other is that something will get you. Some horrible creature will consume you with great big teeth and slimy long fingers...This second fear materialized in the form of a paw on Maybell's arm. She shrieked and jumped backward. Her heart jumped into her throat, and she was about to flee in terror when she heard the voice of Myron Mole offering this in the darkness; "Its okay, you be alright, I ain't going to hurt you...take my paw...this way. I is the Mole, the leader-in. The greeter-in, Myron, I is Myron." Myron waited patiently for her to speak, knowing she had suffered a jolt, some other creatures had run off, dropped the Thread and fled screaming when he had touched them in this total darkness. He grinned to himself with the memory of one Warrior Mouse who had run all the way back to the very door of the Baggaraggs in terror. Maybell could not speak for a moment. She had a sudden impulse to smack the Mole in the snout for frightening her. She gave it some serious consideration. She felt she may have swallowed her tongue in fright. Her under drawers were damp, for goodness sake.
Maybell stated with some recovered composure,"You could've warned me that you were there."
Myron replied, "Don't make no difference Miss, you'd have peed yourself any old way. Happens most times...you bain't be the first to act thatda way. Come on now. No harm...I take ya on in to the houst." " I spect you'd wanna speak to Mrs. Tenderstitch."
Maybell nodded in the dark. She followed him along, tempted to grab him by his stubby tail and give it a good yank.
There were noises up ahead and a bright light. VERY BRIGHT. Blinding.
Myron said,"There ya go Miss. Far as I go."
Maybell had to shield her eyes from the sunlight that streamed into the room. She was standing in a small opening in a baseboard under a kitchen cabinet. Her hat was askew, and draped with a cobweb. Her drawers were wet. Her belly was empty. Her dress was certainly soiled and she felt sure that she had transported a spider on her shoulder when she crawled through that wretched tunnel. As she collected these wrongs, listing them indignantly in her mind for telling later ( to whom she did not know, but she felt certain that she was due a little sympathy), she realized that she was looking into the eyes of a large grey cat.
Posted by Baggaraggs: at Thursday, January 01, 2009

Maybell needs some new underdrawers if your not too busy :)