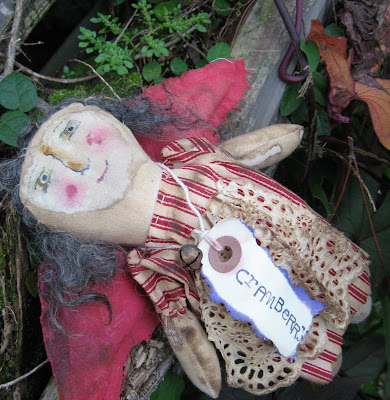 Cranberries is filling my freezer with Frozen Cranberries.
Posted by Baggaraggs: at Friday, October 30, 2009 2 comments: 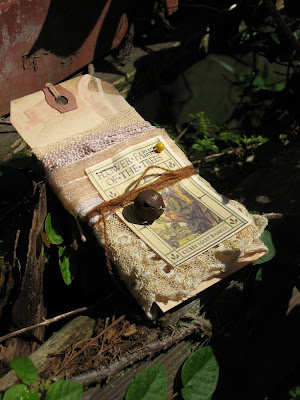 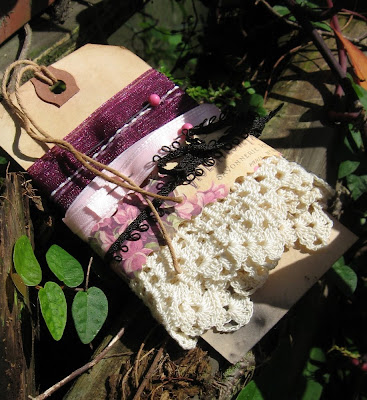 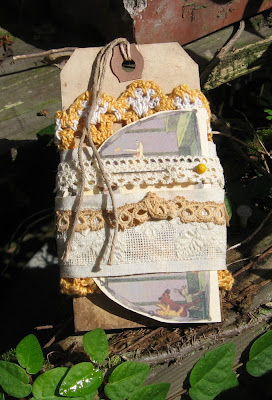 Here are some of Grace's Trim Samplers that are now available on Etsy. Alot of the trims are vintage.
Posted by Baggaraggs: at Friday, October 30, 2009 1 comment:

Prunella Fig-Pink opened the bedroom door into the darkness of the hallway. There were no sounds. She stopped and listened for what felt like a long time. It was dead quiet. For a moment Prunella felt this to be a wee bit odd, the night sounds of a sleeping household were strangely absent, and if it were you or I who listened to the night voices in our own home, we might find that the absence of the humming of the refrigerator or snoring of our partner As a kind of a signal of distress.But Prunella Fig-Pink was filled with a black purpose and held a glowing purple jar deep in the pocket of Grace's Housecoat, and so she did not really think about the quiet much.
There were eyes that watched her progress down the hallway and through the living room to Grace's bedroom door though. It was a stumbling progress. Prunella's heart was beating fast, now racing as she felt her way through the darkness. I wish there had been a giant spider that jumped upon her face and brushed his hairy legs on her skin, making her scream with fright. There was none.
Prunella felt for the doorknob of Grace's Room. Turned it in silence. Entered softly, feeling her way. Holding her breath. Wanting to allow the hysterical giggle that was threatening to bubble up from her chest to escape, but holding back, swallowing nervously.
There was a faint light from the bottom globe of Grace's bedside lamp that glowed softly, and illuminated the the corner of the room. The rest was darkly shadowed. Prunella stifled a laugh as she thought of Grace being so afraid of the dark that she chose to sleep with a light on. Grace would soon be surrounded by permanent darkness, Prunella thought with evil purpose.
There was no war inside of Prunella Fig-Pink as she approached the bedside, no thought to stop and think it over, no internal debate.There was not one wait and think it over second that slowed her actions. She was wholly given to the idea of poisoning Grace Tenderstitch. She was so intent on her purpose that she missed the familiar presence of Murray at the bedside. That was a mistake amongst many.
As Prunella lifted the glowing jar of purple fluid fom her pocket, there were a few things that happened SUDDENLY!
Grace sat up in bed and snatched the jar of poison. Murray lunged from the shadows and sank his considerable teeth into Prunella's skinny bottom, and then from the bookshelf above her head a war cry from Peg-Leg the Pirate turned every one's head in confusion.
Posted by Baggaraggs: at Thursday, October 22, 2009 3 comments:

This weekend to honor my 55th Birthday, I am offering a 20% off discount on anything in my Etsy shop. Please just convo me first before purchasing, and I will adjust the price for you. Sale is over at Midnite Sunday....as I will turn into a Pumpkin...what?
Posted by Baggaraggs: at Saturday, October 17, 2009 6 comments:

Pumpkin on a Pin Cushion 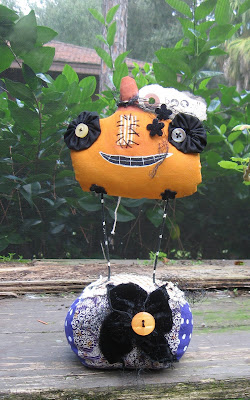 I have recently been thinking about geometric shapes for some reason. This pin cushion was not really a square when it began its life, and comes to an interesting point on the bottom portion. I am hoping to make some interesting Christmas Ornaments from Geometric shapes, but knowing me they will evolve into something completely different. Oh Well. I try to honor the creative process and I give thanks for it...
This PumPkin began its life as a body for a bug. It told me it wished to be a pumpkin instead. Not unlike that Pin Cushion...it was supposed to be something quite different than what it started out to be. I think my ART is trying to tell me something. Hah!
Posted by Baggaraggs: at Friday, October 16, 2009 No comments: 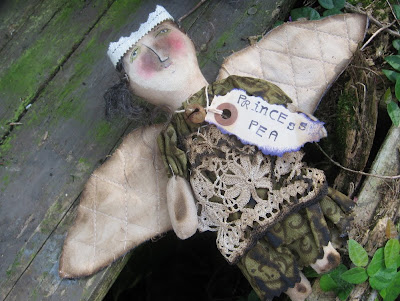 Come to me my Hemlock drops,
Stir a little malice in,
Pennywort the heart will stop, on a bit of cinnamon.
a bit of Lake, a skin of snake, a drop of snow, a goblin's toe,
stir it deep and hatred keep the heart from beating in her sleep!
Prunella Laughed.
It was a sound that made Ernie the Night Watchman shiver.
The ghostly purple luminance faded from the crack under the door.
Ernie turned and rushed quietly off to wake and warn Grace Tenderstitch that Prunella was planning to poison her...evidently in her sleep.
Posted by Baggaraggs: at Monday, October 05, 2009 2 comments:

The evening sky was low and the clouds were smoky, full and heavy with snow. Occasionally the wind would blow the snow across the windows, sprinkling the corners of the sills with sugar-like piles. It drifted about the boughs of the hemlocks near the ground, melting their shapes into the landscape. It was cold and would grow colder.
The evening meal was being prepared. A pot of Bean soup bubbled on the stove. Grace grated potatoes for the pancakes, grated onions and chopped parsley. She turned and stood in front of the cupboard that was filled with jars of lovely things, veggies and fruits canned from the effort of a well tended garden. The smell of a Salmon fillet broiling in the oven drifted into the living room where Prunella sat and stared at the embers of a dying fire. Her mood had not improved and she occasionally snifted as if to punctuate an especially distasteful thought.
Murray snoozed on the floor near Grace's feet. Ernie stood on the counter, watching Grace select a jar of string beans, and it was clear that they were having a conversation that they thought might be overheard. It was stitled and began in fits and starts.
"I think we could take a walk tomorrow morning Grace," said Ernie gesturing silently to Prunella. It was his turn to raise his eyebrows and nod his head in the general direction of Prunella's home.
"I think a walk into the woods is definetly in order," agreed Grace nodding her head back at Ernie and making a grimace in Prunella's Direction in the living Room.
"Do you anticipate a Problem?" asked Ernie, adding hastily "The weather is not very good and the snow..."
" We might have to drag her there..." interrupted Grace in a very quiet voice, "But she is GOING."
The meal was tasty, but the tension in the dining room was felt in the shoulders of all who dined. There was no merry making and Grace felt the heavy atmosphere settle on her as the animals cleared up the dishes.
"We will will be tAking you home tomorrow Prunella." Grace drew her finger in an imaginary circle to include all the animals seated by her and around the table. All the faces present turned to Prunella. Waited for her reponse.
"Ok Grace, I can see that I am NOt welcome here, and I wouldn't want to be where I am not welcome."
The animals all nodded. Grace said nothing.
The evening wore on and Grace was happy to finally retire to bed. She sank deeply into the covers, then kicked off the lot, feeling herself grow too hot. She was restless. Murray too could not seem to get settled. He scratched at the surface of the floor and circled to find a spot.
Meanwhile, a light glowed under the doorway of the guest room, and Prunella could be heard muttering. The door opened and Prunella emerged, looked about and stole into the kitchen. She later returned with some pilfered items hidden under the folds of her borrowed housecoat. The door closed once more and this time clicked with the fastening of the lock.
The bright yellow seam of light at the threshhold slowly turned purple. Yes, thats' quite right. The light turned a noxious and glowing purple and Ernie watched from the shadows and heard her incantation from behind the door.
Posted by Baggaraggs: at Monday, October 05, 2009 1 comment: 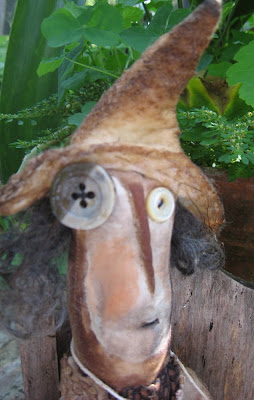 HOW ABOUT SOME CANDY?
Posted by Baggaraggs: at Saturday, October 03, 2009 No comments: