Bennet Wimmer rose early that morning. The sunlight coming through the eastern window of his second story room fell on a rag rug lying on the wooden floor. Bennet sat at the bedside and struggled to get his socks onto his feet. He watched  as the sunlight seemed to illuminate the rug, where thousands of tiny threads reached up from the rags to connect with the dust motes in the air. He wondered what the connection meant, and instantly thought of the unusual connection he felt to Grace. For the one millionth time, he wondered also about the invitation that he had offered her. He was not really a spontaneous personality type. He thought things over and liked to think that he made decisions with careful planning. He wondered if this new behavior was born of grief over the recent loss of his Mother, and the awareness that time was moving on.
He climbed down the narrow stairs to the hallway below, his hand familiar with the places on the wall of the stairwell where he reached out to balance himself descending. He did not need to watch the steps in his descent but did so out of habit, aware that the color of the wood had faded in the center of each riser. He was oddly comforted to  acknowledge that his Mother's feet had made this path going up and down.
The old red wagon that his Mother had used to pull him as a child stood filled with most of the makings of the morning picnic that he hoped to have with Grace. He needed to add a carafe of Hot coffee, and a container of cream, then all would be ready to go. He glanced with some doubt at the ball jar filled with flowers he had cut from his Mother's garden. The gangly stem of a dill flower hung out of the back of the wagon, somehow dislodged from the bunch. he pushed it down into the water of the jar with its companions, wondering if he had over done it. He was aware that he felt slightly foolish, and had lost some of his enthusiasm over night. "Well, hope she shows up" this he said aloud to his Mother's cat.
Bennet left early, pulling the wagon gingerly behind him. He was patient with the readjustment needed to its contents as he bumped over the paths and up the hill into the woods. He was sweating by the time he reached the top of the field where he was to meet Grace, and he was aware that somehow a butterfly had fluttered into his stomach and beat its velvet wings against his diaphragm.
He spread an old quilt upon the ground, and recoiled in horror as he realized that he had selected a double wedding ring design. "Now she will think I am trying to get married...Oh my Gosh, what am I doing?" he made a silent wish that she would not notice the faded design or associate it as he had with some kind of commitment.
He set the breakfast as best as he could with the jar of flowers sitting slightly off kilter in the middle of the blanket. He was not aware that his friends the trees seem to incline their trunks and branches toward the scene and make a bougher with their leafy arms.
The sun was shining brightly, and the birds were singing when Grace Tenderstitch stepped out into the morning. She swallowed nervously as she picked her way through the garden, wondering if she had used enough deodorant, wondering if she looked ok, wondering if her hair was right, wondering if she had over done it. She nervously glanced at Murray who was at her side, escorting her as if to an altar.
Bennet Wimmer nervously glanced at his watch for the one millionth time. He watched as she emerged from her back door into the garden, shifted his weight onto the balls of his feet. He stood with his own hands clasped in nervous anticipation and felt a surge of delight as the butterflies in his stomach beat wildly against his ribcage.
Posted by Baggaraggs: at Thursday, August 19, 2010 3 comments: 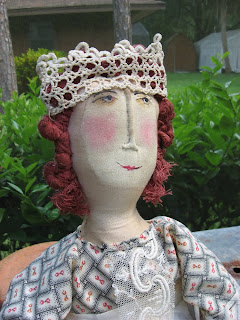 She was fired from her job as the Upstairs Mending Maid for whirling about the Ballroom.
Posted by Baggaraggs: at Saturday, August 14, 2010 5 comments:

I am beginning a new venture. Its called The MossThread Museum. I have started a new Blog and a New Etsy shop. It will feature vintage lace and linens with manufactured provenances...made up ones. the stories will be told by the curator and prisoner of the MossThread Museum, whose name is Ledley Barbour. I am excited about this new endeavor and hope to offer some new things for Halloween, Bugs and such. Wish me LUCK. truly your Friend, Robin
Posted by Baggaraggs: at Wednesday, August 11, 2010 3 comments:

Matters of the Heart are sometimes complicated. The heart has its history in every person after all. It has a memory of tenderness and yearning, reaching out for another and being brushed away like crumbs on a shirtfront. It never completely hardens, don't ever let anyone tell you that. I won't believe it, and I hope you don't either because that means that the hardness has crept into your own heart. But that is your story. This is Grace's story.                                                                                                                                        Grace's heart had become fearful of hurt and did not trust. She loved her animals, thought of them as people. They were her people. But some time long ago, Grace had really stopped trusting Human Beings.
She had accepted this, binding herself to her land and her animals with years of work and care. She was therefore somewhat surprised to find a tiny creeping feeling of interest in Bennet Wimmer.
Have you ever found something unexpected growing in your garden. Something that just popped up? Besides weeds, of course. My Mother use to call these little surprises "Volunteers." That is what Grace felt popping up in her heart, a "Volunteer." A tiny, tender shoot of emotional greening. I can tell you right now, she was tempted to stomp it out like some people grind out a cigarette butt.
As the day wore on, this feeling of ambivalence simmered in Grace's gut, making her feel slightly flu-ish.
Murray waited and watched her. Stewing.
He was relieved when she finally spoke later that afternoon. "I am not going up there tomorrow morning Murray."
Grace spoke her thoughts as if Murray had shared every thought she had processed in her brain all that long day. There was no prelude. She did not talk about her preoccupation and knew it was not necessary.
Murray knew his part in this kind of exchange and only grunted in response. He knew it was best to try to let Grace work this out for herself.
"I think its best to not start something like this with him, that Bennet Wimmer."
"Of course, I am not sure what THIS really is Murray." Murray nodded and grunted again, wondering what there was for supper. This process with Grace could take a while and he was hungry.
"Maybe I should go tomorrow morning, see what he has in mind...just be neighborly...maybe it would be rude to not show up at all. Afterall, he has just lost his Mother, poor man."
This one sided conversation went on and on. Murray never actually did more than grunt and shake his head in what he thought might be an appropriate spot.
Grace finally concluded "Ok Murray, I am going to meet Bennet Wimmer tomorrow morning. No expectations. Just the neighborly thing to do."
Murray nodded and rolled onto his side. He was exhausted.
Posted by Baggaraggs: at Tuesday, August 10, 2010 1 comment: