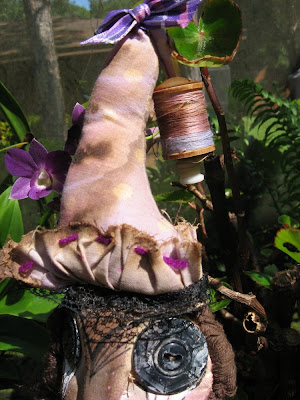 Prunella Fig-Pink paused before the bathroom mirror to once more check her appearance. She could feel her heart skipping a beat or two as she carefully arranged the remains of her party hat. There was an old wooden spool attached to the hat that acted as a tassel and hung at an angle, with little threads spinning out like tiny legs. She applied another coat of Black Lipstick, and smacked her lips. She Looked Great! They are almost here, she thought with great excitement.

The doorbell sounded. She rushed towards it, and jerked it open with a smile of anticipation. "So glad you could make it," she said nervously. "Please come in, come in, I am so glad that you are here."

Peg-leg the pirate motioned to Big Punzee to move the wagon through the entrance. As their eyes met Big Punzee shrugged her shoulders, as Peg-Leg lifted her eyebrows in surprise at their reception. Big Punzee looked around. The entrance hall to Prunella's home was papered in faded pink cabbage roses. There were some dark stains along the ceiling that had dripped down the wall in long jagged stalactites. There was an odor of mildew that permeated the air. Oh," said Prunella, "What have you got there? What have you brought to the party...is that for Me...for me," she repeated when no one answered. "Thank you so much for coming to my Birthday Party...I've been waiting for you," she gulped a little nervously. Peg-Legs thoughts raced ahead of Prunella. Her opportunist instincts were honed to a fine predatory edge. It was only a moment before she sized up the situation and had it turned to her advantage.

"We are honored to be your guests," said Peg, who waved her hands in encouragement for the other pirates to speak up...."Yes, thank you for inviting us," some chorused in. There was a crowd of cold and Hungry PIe-rats that were introduced to Prunella. As the names were given and pleasantries exchanged, Peg-leg had an opportunity to further scan the scene. She spied out the Dining Room with its cobweb of stretched and faded streamers, and eyed the Castle shaped cake that was in danger of crumbling into green dust upon the table.
"What's that smell? asked Big Punzee as she glanced around looking for the source of a most unpleasant smell.

"Is that my Present?" Prunella queried, impatiently waiting to be answered. She gestured towards the wagon with the Thread Pusher inside.

"Oh Yes," answered Peg, "We got you this here Thread Pusher as a birthday present...ain't that right Big Punzee?" Punzee eyed Peg with a look that seemed to say "What are you crazy?' and nodded her head.

"Well, thank you, Thank you...a most unusual present I would like to say. Prunella added.

"Well come into the dining room and we'll begin the festivities."

Looks amongst the rats were exchanged. They hesitantly followed her through to the middle part of the house where the party was set to go, many years ago.

Big Punzee realized that the smell was actually coming from Prunella herself.

The rats hopped up onto the table and looked about. It takes alot of something unsavory to put a rat off their food, but this offering set them back. Big Punzee stepped backward. She looked around the dining room sniffed the faded streamers, and the green castle cake that smelled of Raid. "Something bad is happening here," Punzee thought to herself.

Prunella hurried to the kitchen to find extra dishes for all of her guests, and to retrieve the beet juice for her empty punch bowl. She was very nervous and anxious to please, but something else was happening to Prunella that no one would have been able to predict. As she opened the refrigerator door, and saw the little light burning within, a thought came to her that she had tried not to think about for many years. Feelings of hurt and anger rose up in Prunella's throat. Why had no one come to her Party all those years ago? Why, oh why, had no one come? And now more importantly, Who were these rats that had arrived with a Thread-Pusher in a Wagon? Confusion entered into Prunella's brain and she wrestled with her thoughts to try to sort them out. It had been a long time since she had tried to, and her ability to wrestle was weak. "I will simply have my Birthday with these Rats, everything will be Fine." The denial attempted to re-assert itself. Gathering some of the jars of beet juice, she returned to the Dining room, with a smile plastered on her face. "Help yourselves to refreshments,"she said, waving a hand towards the platters of moldy cookies and cupcakes that she had carefully made so long ago. She watched the faces of the Pirates and realized then that there was a look of dismay on every face. No one was going to help themselves. Even Pie-rats will not eat a cupcake that is moldy and rotten. The Pie-rats looked at Peg-Leg for instruction...surely they would not be expected to eat this ghastly food.

Prunella watched, and then frowned. She remembered the extra plates that she had left in the kitchen and went to retrieve them, hurrying off.

Prunella's Mother had taught her that "THose who listen, never hear Good of themselves.' She tried not to listen to the whispers on the other side of the kitchen door, but she had been listening to her thoughts whisper to her for such a long time...and these were real Whispers. And so it was that Prunella Fig-Pink hovered at the kitchen door and heard the PIe-rats talking about her. The things they were whispering went something like this: "What is we doing in this CRazy Woman's house Peg? We can't eat this moldy food...I think she is a wack-job! She's got a squirrel loose in her attic! Let's get rid of her Peg! Then we can set up shop here. This place is OURs Now!"

Something happened to Prunella then that should have happened a long time ago. You can call it a crack in the wall of denial if you like, or maybe just a leak. Never the Less, Prunella understood that she was in danger from these Pie-Rats. They had not come here for a party. She did not know what they had come for...but it was not to have a piece of her Birthday Cake.
The whispering continued as Prunella, very quietly slipped her coat off the hook in the kitchen closet and wrapped herself in its warmth. She had made a decision that both frightened and exhilarated her. She hastily opened her kitchen door and stepped out into the winter night. She was going to ask Grace Tenderstitch for help.
Posted by Baggaraggs: at Sunday, April 19, 2009

It must`ve been awful that a rat wouldn`t eat the food! Grace Tenderstitch to the rescue,yeah!!!!can`t wait to see what happens next,phylliso

blueberries in the fields said...

thanks robin for the sweet comments. i think yours are faulous too. i especially love the names and story you give to your dolls.

What a fun read! I can't wait to see what happens next! I love the tasel on Prunella's hat!

MORE, I am sitting here on the edge of my chair wondering how are they going to get rid of all those ungrateful rats. The least they could have done was eat a cookie.HA HA. Robin I really cannot wait to see what is ging to happen next. I also keep seeing Disney ever time I read this. Wonderful,Julie