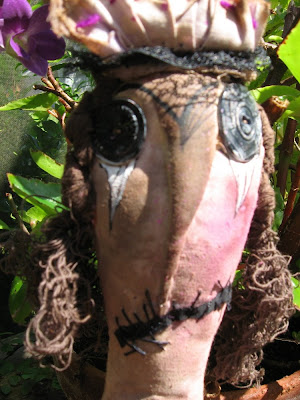 Grace Tenderstitch slept in a brass bed. The mattress was too hard and needed to be replaced, and that was her thought for the 1000 time before she lay down to sleep that very late night. Around her was a stack of books, in various shapes and in a state of disarray, almost like a defensive wall against harm. The books rose up at precarious angles on her nightstand, threatening to spill over and take the lamp with them to the floor. They were somewhat dusty, a commentary on what Grace thought about housekeeping and where her personal space fell on the list of priorities. She didn't like that she was low on the list, and occasionally struggled to change it without much success.
Murray slept on the floor next to her. He had a bed of his own which he had abandoned to Swain the Cat. He preferred the floor next to Grace.
And this is where they all were, in there places softly snoring, when Ernie the weasel woke Murray with the News.
This next part of the story is difficult and complicated for me to write about. I guess its just best to tell the truth without much of a slant in any one's favor.
Murray felt that his job in life was to protect and guide Grace Tenderstitch. He knew that she needed to sleep and wanted her to not be disturbed with any more drama and what he considered to be unnecessary interruptions. For this reason, he growled softly at Ernie's News. It was like swearing in dog language. I won't translate, but you can use your imagination.
"I am not going to wake her," he hissed to Ernie.
"I think you should," insisted Ernie, "otherwise what am I to do with her?" I am not sure that Grace would even want her to bed down on the couch...she has an abundant odor...an I know odor..." this he added lamely, nodding his head.
Murray paused for a second and wondered how to deal with the situation. He had thoughts of running the Fig-Pink woman off, and swearing everyone to secrecy. Something told him that Grace would not approve of this behavior, or appreciate it.
He got up from his spot and stretched. His joints ached. He was not a young dog anymore. He took his giant black nose and rooted it into the armpit of Grace Tenderstitch, flipping her arm a little in the air. Waking her. "Whaaaat?" said Grace in an irritable voice. She sat up and laid her hand on Murray's soft woolly head.
"Grace, "said Murray, "Prunella Fig-Pink has come to us. The pie-rats have taken her home. She is here for help...and..." Murray couldn't think of what to say after this, he just didn't know how to finish.
Grace sighed. She lifted herself up and felt around for her robe which was cast over the top of a bookcase. As an after thought she switched on the light. Found her slippers.
"Come on," she said to Murray and to Ernie the Weasel.
In the living room of the Baggaraggs, a light glowed from a lamp that cast a shadow over the hunched form Of Prunella Fig-Pink. She was cold and despite her coat, shivered as she waited for Grace to get up. She argued with herself inside her head, and managed to quell the thought that she should just leave, and go home.
Grace stood in the doorway and watched Prunella for a moment before she spoke. She wanted to recoil in horror at the sight, but stood her ground. "What a night," she thought to herself. Out loud she said hestitantly, "Prunella?"
Prunella Fig-Pink looked up and in a pressured voice said "Grace why didn't you come to my Party?"
Posted by Baggaraggs: at Friday, May 22, 2009

I hate to admit this,but Grace`s bedroom sounds like mine with the books scattered everywhere....phylliso

I love the name 'Swain.'
Your writing is lovely and so descriptive. I can see it clearly.
Love, Debra

Hi Robin, love the new look of your blog and the story..well very entertaining...I take it prunella is what you call "high maintenance?":) thanks for the kind words...yes, I am going through some "stuff" but have to have faith that it will all work out..thanks so much for caring.:)
Is it hard to use a template like yours on a blog? It is so cool...hugs, Amy

PS love all the stuff over in your asylum as well..so colorful..so cheerful...I am just loving you collage style of making dolls!!!